A Bouquet in a Niche 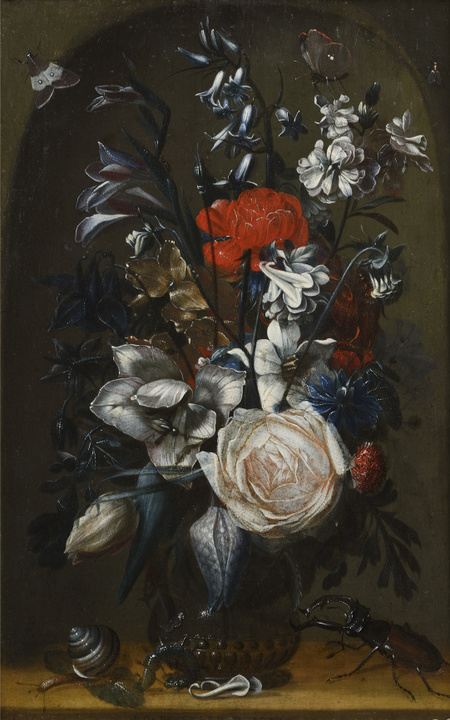 J. G. Beitler specialised in still lifes, but the Strahov collection also includes one of his landscapes. He worked for aristocratic collectors such as the Kolowrats in Rychnov nad Kněžnou, and his still lifes were represented in other prominent collections, mainly in Prague. His painting is characterised by fine shades of colours and his precise technique was influenced by J. R. Byss and J. A. Angermayer. Bouquet in a Niche is composed in the same way as the oldest dated Bouquet in European painting from the 17th century, which was painted by Roelandt Savery in 1603 (at present at Centraal Museum Utrecht). Either as the original or a copy, it was part of the collection of the Prague collector Felix Vršovec until 1723. The vase of flowers that were popular at the beginning of the 17th century is placed in a niche and surrounded by various animals. The most conspicuous is the stag beetle, a symbol of Christ, and on the opposite side there is a caterpillar and a snail as the biblical symbols of ugliness.
The symmetrical arrangement of the walls which held collections of painting in the palaces and castles often required that they be created as counterparts of already existing paintings. It is obvious that the still life was intended as a counterpart to Savery's works for which there are three more pendants, one by J. R. Byss (currently in a private collection) and two by J. A. Angermayer (at present in John Mitchell Fine Paintings).