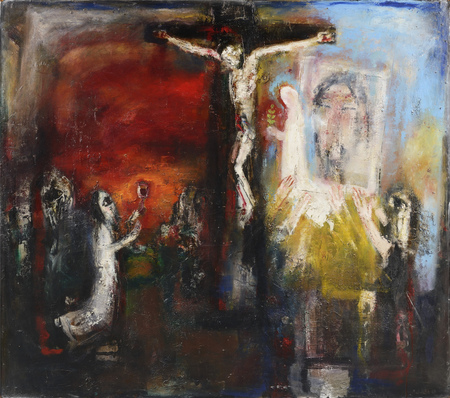 Josef Jíra graduated from the jewellery school in Turnov and studied at the Prague Academy of Fine Arts. Thanks to his rebellious nature, and as the initiator of the art group M 57, he was actively engaged in promoting the freedom of art expression. He painted landscapes and psychological portraits. There are many spiritual motifs and timeless themes relating to human fate in his work. Through his life, he increasingly returned to biblical themes. Between 1989 and 1990 he created Stations of the Cross for the chapel at Malá Skála and about which he commented: "The parable of the Stations of the Cross became the parable of my life. Several times I was sitting on a bench in the waiting room with the white sister Death. But only after that is one entitled to think about such things and paint such things."
One year before his death he organized his own comprehensive exhibition where the painting titled Calvary was presented. Its central motif is the cross with the lifeless body of the Saviour, behind which two figures are a reminder of Christ's suffering before his crucifixion - one is holding the veil of Veronica and the figure kneeling before the cross is holding a chalice in its hands, reminding us of the blood of Christ and the Last Supper. The painting lacks perspective and its main element is the expressive dramatic expression with a palette of colours in impasto.