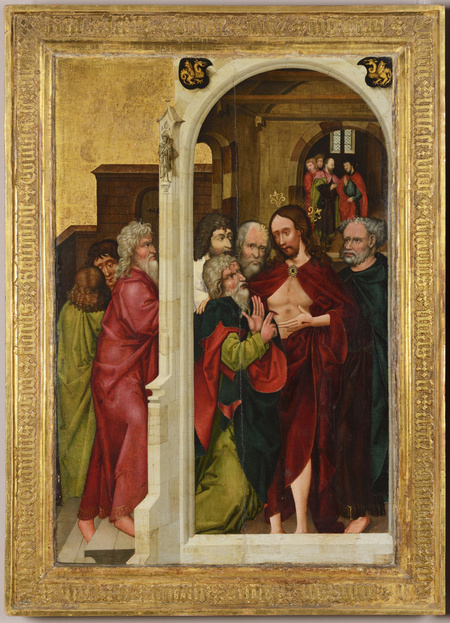 The Master of the St. George Altarpiece - the circle (?)
(worked in Bohemia during the last third of the 15th century)

Like most paintings in the collection of the Strahov Picture Gallery, no connection has been found for these two paintings on wooden panels with the particular space for which they were created. Experts have been trying for decades to establish the author of the work as well as its place of origin. In the past, the paintings were ascribed to an otherwise unknown monogrammist IVM due to the letters inscribed on the socle of the architecture in the central panel. At present it is practically certain that it is only an exact copy of the signature in the graphic print by Israhel van Meckenem. Later the panels were ascribed to the circle of the successor of the Master of the Saint George Altarpiece, a major representative of late Gothic panel painting in Bohemia. However, the authorship still remains uncertain as it seems that the painter was noticeably influenced by the art of Southern Germany.
The central theme of the painting was, at the time of its creation, a less frequently used story from the Gospel of St. John in which doubting Thomas touches Christ's wounds after the resurrection. The scene is accompanied by a quotation from the Gospel of St. John (Jn. 20, 27-28) and on the side wing with Mary Magdalene, there is another quotation from the same Gospel (Jn. 20, 17).