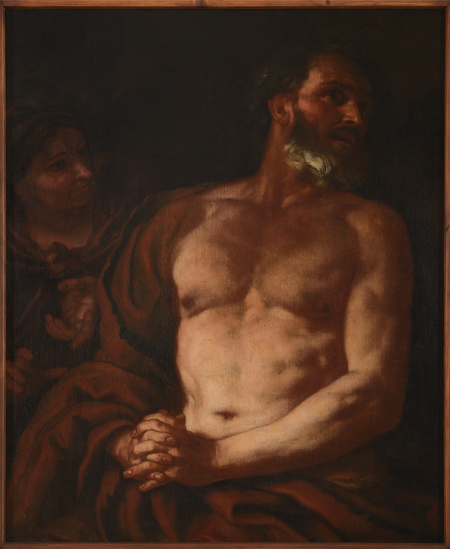 Johann Karl Loth was born into the family of Munich court painter Ulrich Loth. After 1653 Johann went to Rome and from 1656 until his death he lived in Venice where he met the avant-garde artists known as tenebrists. They employed chiaroscuro as well as strong contrasts between light and shadow, in the spirit of Caravaggio. Thanks to his training with Francesco Ruschi, Pietro Liberi and Giovanni Battista Langetti, he acquired a virtuoso style in monumental structured painting, empowered by a bright, yet restrained, palette of colours. Soon he became one of the most sought-after painters of Venetian altarpieces. Many prominent aristocrats from such transalpine countries as Bavaria, Austria and Bohemia commissioned paintings from his workshop. In 1692 he was appointed court painter for Emperor Leopold I.
He worked with the theme of Job from the Old Testament, a man venerated in Venice as the archetype of patience and suffering, and considered a saint. The theme may be related to the devastating plague that swept through the city on the lagoon and also to the reverence to Job as the protector of those who suffer from skin diseases.