Portrait of an Old Woman 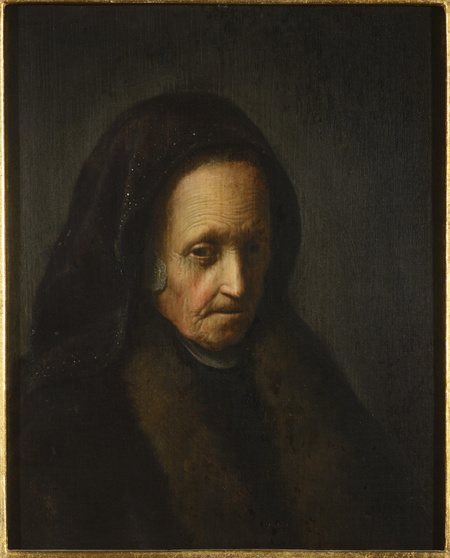 Portrait of an Old Woman
around 1630

At the age of fifteen, Gerrit Dou became the first student of Rembrandt van Rijn. When Rembrandt left for Amsterdam in 1631, Dou established himself as an independent painter of portraits and small genre scenes, in which he placed great emphasis on detail. He is one of the most significant 17th century painters from Leiden as well as a founder of the local Painters' Guild of St. Lucas and the school of fijnschilderns (fine painting) which was active from around 1630 to 1710. Its members concentrated on a refined technique of the minute style of painting which depicted daily life.
While he was a young man and during the time he was training in Rembrandt's studio, he painted the portrait of the old woman. Dou's other portraits of the woman with a wrinkled face, sunken eyes and a distinct nose may be found in several other galleries, such as Gemäldegalerie in Berlin and Rijksmuseum in Amsterdam. The same woman is also portrayed in Rembrandt's portraits, as in the Royal Collection in Windsor and in the Wilton House collection in Salisbury, England. In the past, all the portraits were connected with Rembrandt's mother Neeltje van Zuytbroeck.