St. Francis of Assisi Listening to the Music of Heavenly Choirs 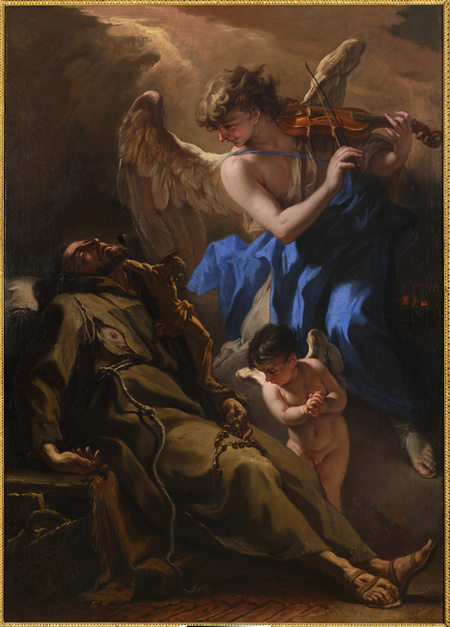 St. Francis of Assisi Listening to the Music of Heavenly Choirs
after 1700

He was a student of Federico Cervelli and Sebastiano Mazzoni and lived in many European cities, including Paris where he became a member of the Academy of Fine Arts in 1718, which enabled him to become familiar with different Italian schools as well as those of other nations. His work significantly influenced the further development of Central European painting.
Saint Francis is lying in a cell, exhausted by illness, with stigmata on his hands and feet, listening to the music of the heavenly choirs played by an angel on a violin. His closed eyes may be a sign of the partial blindness from which he suffered towards the end of his life. It is likely that Sebastiano Ricci created the painting when he worked on the frescos for Schönbrunn in Vienna. The painting came to Strahov from the Colloredo-Mansfeld collection at the castle in Opočno, which previously housed one of the best collections of Italian painting in Bohemia. The perfect composition and the pallet of colours make the painting a masterpiece, rightfully one of the treasures of the Strahov Picture Gallery.