Still Life with Fruits and Birds 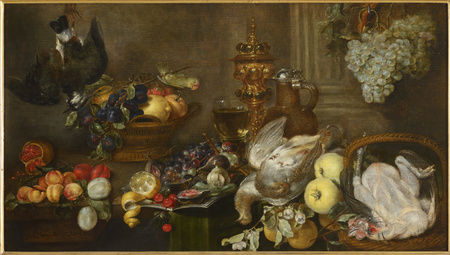 Still Life with Fruits and Birds
1647

This signed and dated painting by the Flemish painter Alexander Adriaenssen, a master of the Antwerp Painters' Guild of St. Lukas, is a magnificent example of an ostentatious still life with fruit. Still life painting was perceived as a form of competition with nature. It was popular even in antiquity, where we can find it in murals and mosaics. In Flemish still life painting from the late 16th and 17th centuries, a prominent role was played by various fruits, often exotic, placed in overfilled baskets next to shining tankards, porcelain dishes and a variety of game. In the centre of the painting there is a ceremonial cup used during wedding ceremonies, around which lie different types of fruit and dead birds - a lapwing, a pheasant and a plucked fowl. The seemingly heterogeneous mixture has a remarkable context. Because such paintings were usually hung in a place of honour in the houses of rich aristocrats, they played a role during learned conversations, where the participants found symbolism in the depicted details. In the spirit of recognising the symbols, the work is full of sensuality and various erotic hints. It was most likely intended as a wedding gift.