The Extraction of the Stone of Madness 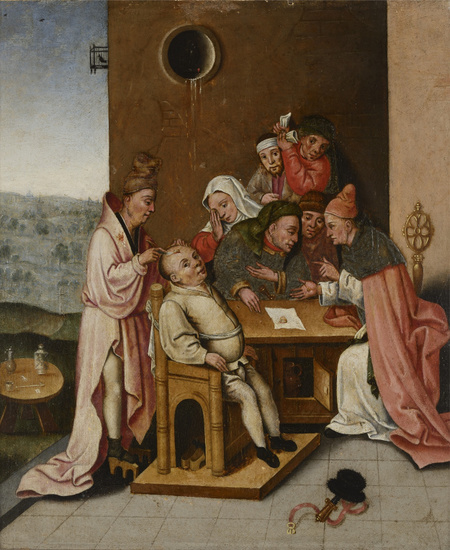 The painting has the same theme that Jheronymus Bosch used in his works that are now part of the collections of Prado in Madrid and the Rijksmuseum in Amsterdam. The painting, created by one of Bosch's successors at a later date, depicts a man tied to a chair on whom a trephination was performed - his skull was opened and the stone of madness taken out. The bizarre situation is watched by a group of people of different status who meditate in earnest over the extracted stone.

According to a folk superstition, a stone in a human body was the cause of mental disease and depression.  A stone could be found not only in the head, but also in the intestines or elsewhere. It needed to be removed in order to cure the patient. These were charlatan shows rather than real surgeries; the surgery was only feigned, which is one possible interpretation of the painting. Upon closer inspection, we can see several interesting details in the painting - the surgeon's clogs, a round window with a sitting owl and a cage with a bird in it. The items depicted as well as the scene itself represent a number of period symbolic meanings and clues by which the author derided folly, stupidity and slow-wittedness.