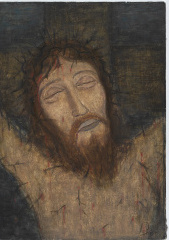 Alén Karel Diviš studied with the painters Josef Boháč and Emanuel Dítě. In 1926 he went to Paris where he attended the lectures of František Kupka. Initially, he was influenced by Cubism and abstract art, but after visiting North Africa in 1932 and Brittany, he focused on depicting the lives of suffering individuals. After the occupation of Czechoslovakia in 1939 he went back to Paris where he was accused of espionage and imprisoned. In 1941 he went to New York where he stayed until 1947. His time in jail damaged his health and this showed in his post-war work, the distinct theme of which became the depiction of the crucified Jesus Christ, symbolising human suffering and the proximity of death. The first drawing for Crucified, dated 1941 and titled Christ the Prisoner, was followed by a whole cycle of paintings with this theme. This work, the model for which may be an older work, is not only the final work of the whole group, but also the last dated oil of Diviš's. It is a suggestive depiction of the face of the Saviour reflecting a quiet reconciliation with death.