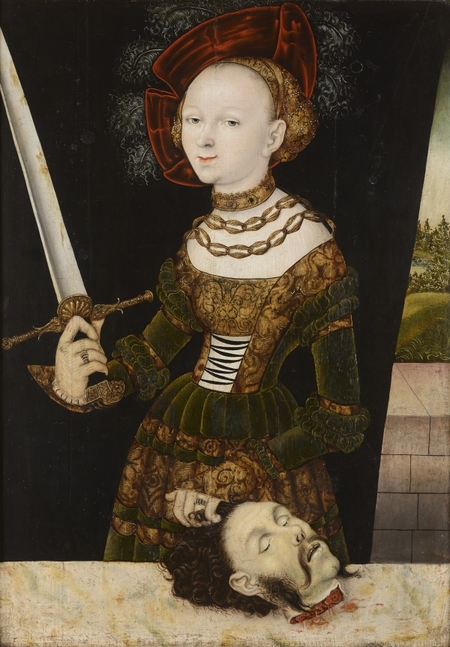 We only know the author of the painting by the initials IW. He first worked in the workshop of Lucas Cranach the Elder who worked for most of his life for the Electors of Saxony. At the beginning of the 1520s, IW started to work independently and between 1520/1525 and 1540/1550 he mostly painted for customers from northwest Bohemia. In his paintings he often drew from Cranach's works, which is also the case in this particular work. The theme of Judith may be found in more than twenty paintings by Lucas Cranach and his circle. In this painting from Strahov, Master IW depicted a pious Old Testament woman from Betulia in Assyria. She tricked Holofernus, the commander of a besieging force and, after he captured her, she decapitated him. A refined lady in expensive clothes with jewels in her décolletage and with a smile on her lips shows, with stoic calm and contentment, the sword and the head of the oppressor. There are analogies to this painting in other paintings by Master IW kept in private collections - in particular The Suicide of Lucretia and Salome with the Head of John the Baptist.