Plants in the Botanical Garden 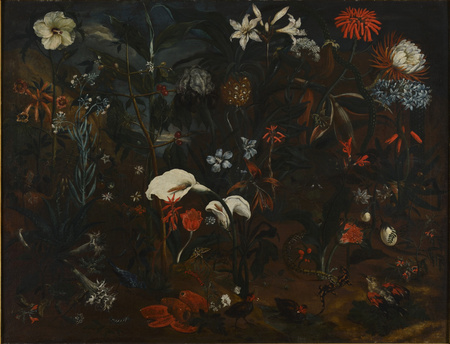 Plants in the Botanical Garden
after 1700

Franz Michael Sigmund von Purgau (Burgau), inspired by the work of older Dutch artists, specialised in still lifes. In natural recesses he captured plants blossoming on the edge of the forest and the quiet lives of small animals, snakes, lizards, frogs, butterflies and other insects. His paintings found their way in particular to the collections of monasteries in the surroundings of Linz. He also worked in the monastery of St. Florian near Linz where there is evidence of his artistic activities, including the restoration of paintings, starting in 1740. In the following period he lived in Vienna. Several of his works are in the collection of the Strahov Picture Gallery, among which this one is considered a curiosity, because besides European plants, it depicts botanical species from exotic lands, such as coffee tree, pineapple, datura and queen of the night cactus. The artist could have taken their appearance from the graphic artwork of the period, from botanical gardens and from the cabinets of curiosities belonging to the nobility and learned society. Besides the flowers, many small animals are depicted.