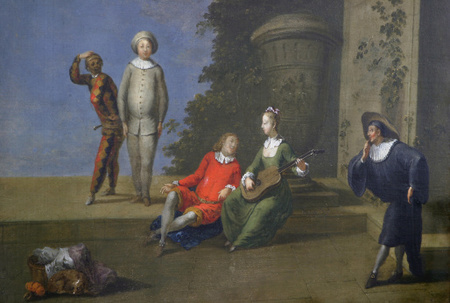 Scene from Commedia Dell‘arte
around 1760

He was a son of Kristian Grund, court painter for Count Norbert Vincenc of Kolowrat. After 1737 he went to Austria and probably also to northern Italy to gain experience. In 1751, a year after getting married, he became a member of the Lesser Town painters' guild. He needed to ensure the security of his large family and so he expended a great deal of creative energy. His work was particularly influenced by German miniature painters, especially landscape painter Franz de Paula Ferg whose paintings were very popular on the art market. Grund also found inspiration from French painter Jean Antoine Watteau whose scenes from commedia dell'arte were transferred into graphic art by Charles Nicolas Cochin the Elder. In this painting the artist depicted Colombina playing the guitar beside her lover Leandre and his rival Dottore is approaching them, while Harlequin and Pierot are looking on in the background. The Strahov collection includes a rather large collection of Grund's works where we can clearly see the colourful rococo world with a great number of various genre scenes.