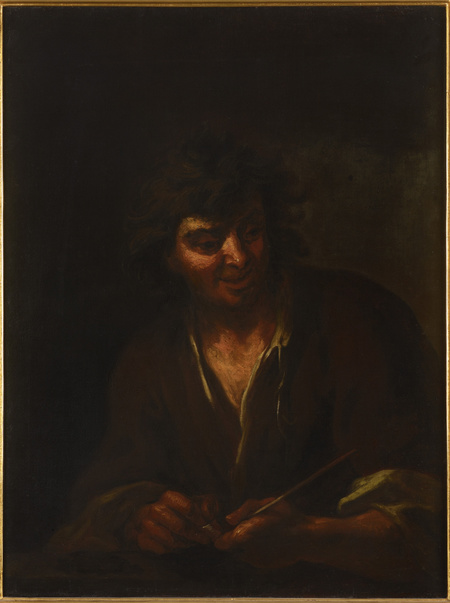 Petr Brandl is rightfully known as one of the most significant painters of Czech Baroque. He obtained most of his art education by studying the Venetian, Roman and Dutch paintings in the collection of the Prague Castle and he also drew from the work of Czech painters from the second half of the 17th century. The Strahov Premonstratensians were one of his employers. After 1700 he painted exquisite paintings for the main altar in the Basilica of the Birth of the Virgin Mary in Doksany and in 1723 he added two more side altars with St. Joseph and the Martyrdom of St. Lawrence.
The portrait of the Smoker is one of the few works of Brandl's with genre themes, otherwise he mainly concentrated on religious themes and portraits. Starting from the 17th century, genre painting that depicted everyday life was predominantly the domain of Dutch artists. Depictions of objects and figures  with symbolic meaning are often found in Brandl's works, however they are not always such unambiguous moral examples as in this painting. Brandl's characteristic chiaroscuro painting of a sketchy nature with impasto depicts a young man stuffing his pipe, looking forward to the pleasure of smoking. Smoking arrived in Europe during the 16th century as one of many overseas discoveries. In the following century it was considered as the devil's invention and vilified, mainly by the church and in scientific circles.