Still Life with Citrus Fruits and Pomegranates in a Wicker Basket 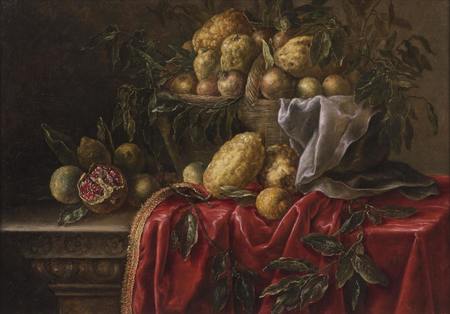 The author's background and training is unclear. However, it has been ascertained that in the middle of the 1650s he settled in Vienna where he worked for the imperial court, painting still lifes, landscapes, portraits and religious themes in the spirit of the Flemish-Italian style. His works can be found in the picture galleries of many Czech and Moravian castles. The most valuable part of his work are the still lifes for which he drew inspiration from Italian paintings.
In the composition of the painting, a major space is taken up by a basket of citrus fruits, among which the citrons predominate. They were used not only in food production but also for ritual purposes, in particular the celebration of the Jewish holiday of Sukkot which commemorates the exodus from slavery in Egypt. The pomegranate cut in half may symbolize original sin, as well as fertility and prosperity, and the laurel placed over the edge of the table is a symbol of respect, life and fame. In a way the still life is similar to another of Libalt's paintings; Still Life with Citrus Fruits, Figs, Plums and Laurel in the picture gallery of the Premonstratensian monastery in Nová Říše.