Strahov Triptych - The Visitation, The Nativity, The Flight into Egypt 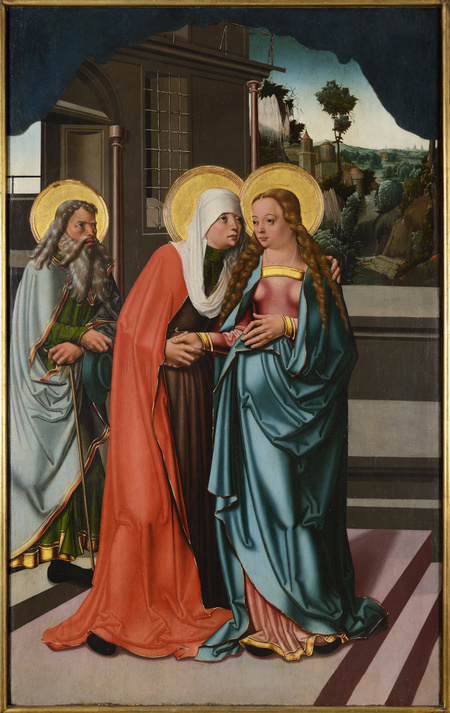 Strahov Triptych /
The Visitation, The Nativity, The Flight into Egypt
cca. 1510

The name of the painter is unknown. The Strahov Triptych is named after a large winged altar with eight panels dating back to about 1505, nowadays located in Litoměřice. The author worked at the Prague court of Vladislaus II Jagiellon and is rightly regarded as one of the most prominent late Gothic artists in Bohemia where, among others, he participated in the monumental cycle of wall paintings in the Chapel of St. Venceslaus in St. Vitus Cathedral at Prague Castle. His work includes elements of Italian and Salzburgian paintings and these are visible in the differences between the details and the whole. The view of the open landscape in the background and a more realistic depiction of the anatomy of the figures in the central panel; the scene of the Visitation, is clear evidence that the author received training in Northern Italy. The side wing with the scenes of The Nativity and The Flight into Egypt was painted by the Master and his assistant, and the scene in the bottom half is modelled on a graphic work by Albrecht Dürer. The back side is decorated with the figure of the Virgin Mary from the scene of the Annunciation. The opposite wing used to have the Massacre of the Innocents (at present privately owned) and more than likely, the Circumcision of Christ.