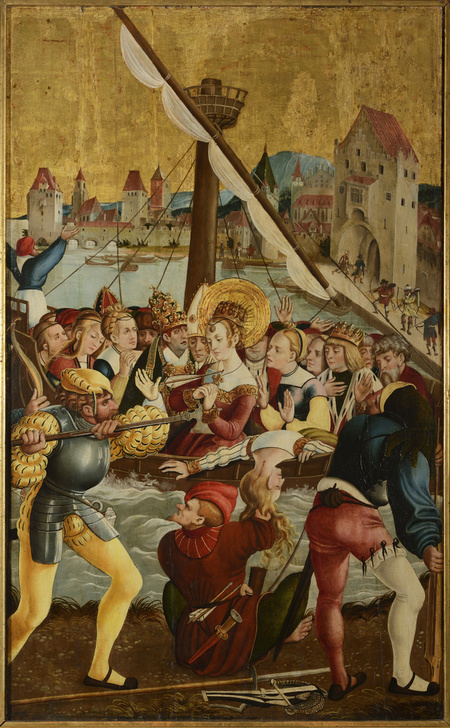 The author, or rather authors, of the four panels of the winged altar are from the circle of prominent Passau artist Wolf Huber. The paintings were inspired by the works of Martin Schongauer, Hans Süß von Kulbach and Albrecht Dürer. Despite slight deviations in the painters’ technique and the size of the panels, it can be rightfully assumed that the panels were originally part of one altarpiece. On the inner sides there were New Testament scenes from the life of the Virgin Mary (Annunciation, at present privately owned) and Jesus Christ (Adoration of the Shepherds, Adoration of the Kings), while on the outer sides there were scenes from the lives of the saints (The Death of St. Barbara, The Death of St. Ursula and Her Companions).
The four paintings, plus the currently missing painting, The Descent from the Cross, were kept in the residence of the Strahov Premonstratensians in Hradištěk u Prahy before the Strahov Picture Gallery was established. The cult of St. Ursula had a rich tradition at Strahov because as early as 1256, Bishop Conrad of Cologne donated a large quantity of the remains of the Saint and her companions to the basilica. A special chapel with the altar of St. Ursula (nowadays the Chapel of St. Norbert) was built during the Middle Ages. It cannot be ruled out that the paintings were originally intended for the altar of this chapel in Strahov.