The Madonna and Child, called the Strahov Madonna 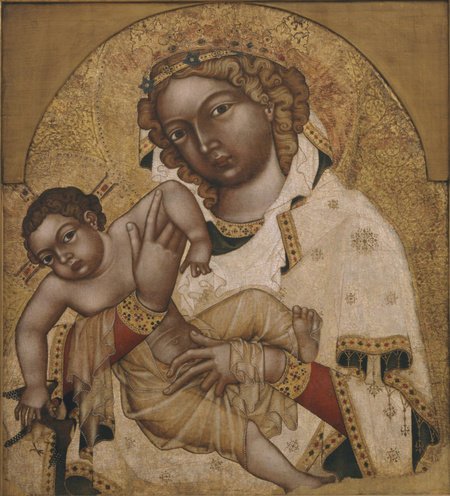 The Madonna and Child, called the Strahov Madonna

The masterpiece created during the reign of the Czech King and Emperor Charles IV was probably inspired by Italian artworks, perhaps from St. Martin's Church in Velletri and from Palazzo Venezianno in Rome. The origins of the composition, however, may be found in the famous icon the Mother of God, which dates back to the 11th century, and is kept in the Orthodox Monastery of Kykkos in Cyprus. The painting is striking, not only because of its large format, but also the colours, which originated in the iconic Byzantine painting. The dynamics of the interweaving lines are mastered to perfection, due in particular to the unusual position of the Infant Jesus in the hands of his mother. His unrest hints at the subsequent fate of Christ, the atypical position may remind us of the suffering of Jesus on the cross. A goldfinch pecks at the little boy's thumb. According to one legend, a goldfinch plucked thorns from his brow as Christ was carrying his cross to Golgotha. A drop of blood stained its feathers and remained its characteristic sign. The theme of martyrdom may also be seen in the foot into which one of the nails was driven during the crucifixion and which is turned in the direction of the spectator. Christ's mother's head is adorned not only with a crown, but also a headdress. This purely Czech motif is found in several other Madonnas dating back to the middle of the 14th century, thus the connection with Emperor Charles IV and his reverence for the Mother of God cannot be excluded.