The Triumph of God's Wisdom 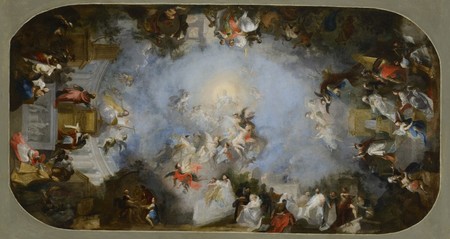 The Triumph of God's Wisdom
modeletto for a ceiling fresco for the Philosophical Hall of the Strahov Library, 1793

After the Abbot of Strahov, Václav Mayer, decided to expand the library by adding another hall, he had to solve the problem of how to decorate the new premises. In 1784 Emperor Joseph II closed down the Premonstratensian monastery in Louka u Znojma. Shortly before, part of a new convent building had been built, including a library hall with a ceiling covered with a fresco by Franz Anton Maulbertsch, professor of the Academy in Vienna. Abbot Václav Mayer managed to negotiate with the imperial court the purchase of the library shelves from Louka for the new Strahov library, the layout of which was adjusted to accommodate the shelves. In 1793 he agreed with Maulbertsch that he would create a new fresco similar to the one in Louka. In 1794, before Maulbertsch and his assistant Martin Michl painted the frescos on the ceiling of the new library hall (currently the Philosophical Hall), he spent six months working with the theme of God's Wisdom in the History of Mankind. During that time he created sketches in which he prepared the overall layout of the painting and various possible solutions. The general idea of this modelleto is rational knowledge through the spiritual development of mankind, from Adam and Eve to paganism, to Old Testament and New Testament times and up until modern times. For a better understanding of his whole painting programme, a Historical Description was issued in print in which the stories depicted in the vault were explained