After his pilgrimage to the Holy Land in 1138, Bishop of Olomouc Jindrich Zdík had the idea of establishing a monastery of canons regular in Prague. With assistance from the Prague rulers and bishops, a monastery was set up in a place called Strahov, but failed to prosper. It was not until 1143, when Premonstratensians from their house od Steinfeld in the Rhineland arrived in Strahov, that the life of the monastic community started to develop successfully.

First of all, the Premonstratensians built a wooden monastery and started constructing a Romanesque basilica. A stone church, or at least its choir, was probably standing as early as 1149. After completing the basilica, building work switched to the construction of stone monastery buildings, which were almost ready in 1182. The monastery complex was reconstructed after it was hit by fire in 1258. The monastery's material and spiritual development halted in 1420 when the Hussites plundered the abbey. 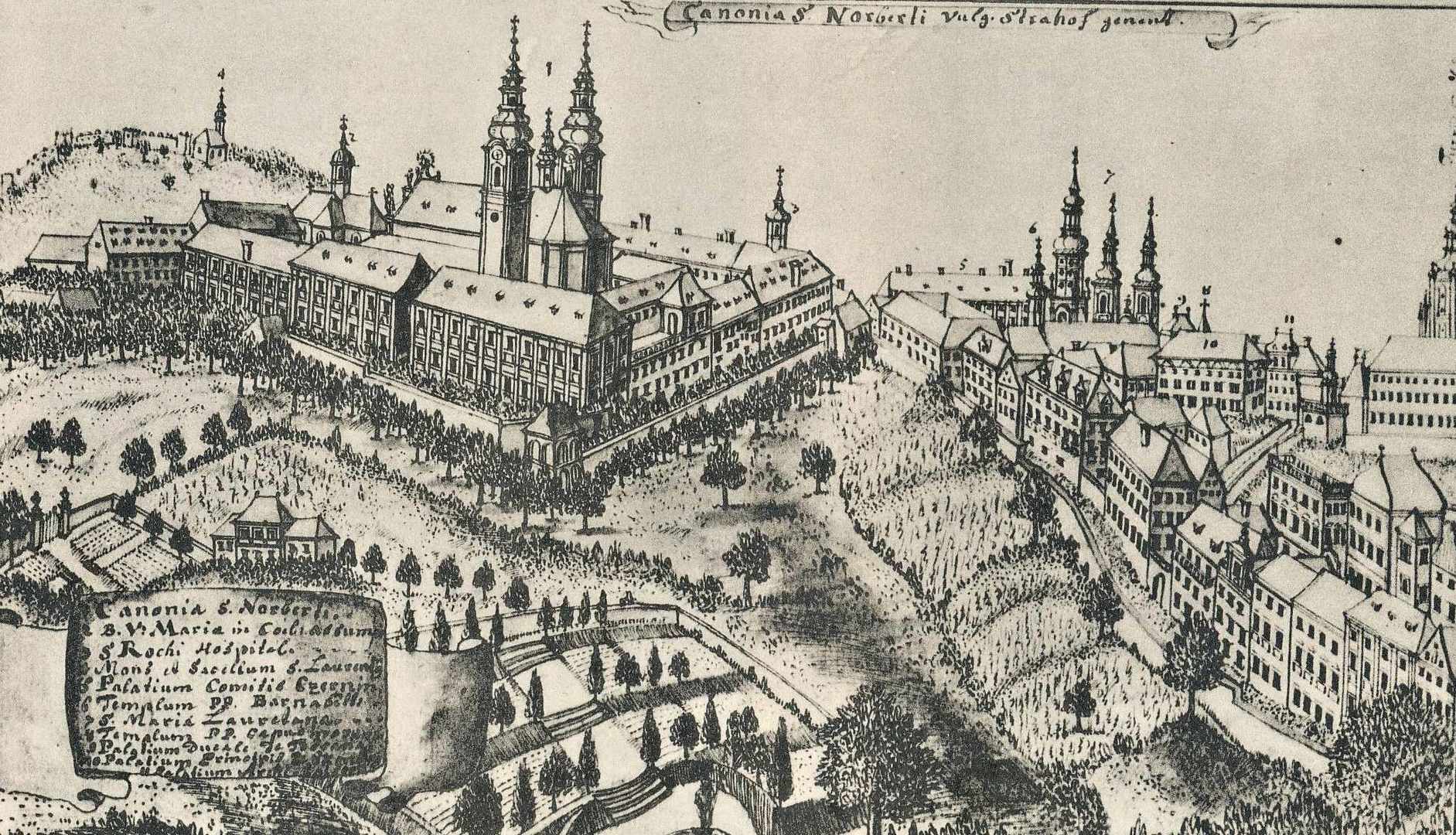 The period up until the end of the 16th century was a time of decline for the monastery, when it only just managed to eke out an existence. The monastery's possession took a turn for the better when Jan Lohelius arrived on the scene. In 1586 he is elected Strahov abbot and starts reconstructing the monastery. Literally and spiritually. He has the dilapidated church rebuilt, erects monastery workshops, reconstructs the prelature as well as convent, and opens new gardens. By 1594, a twelve-member community of brothers is living in the monastery. When Lohelius is appointed Archbishop of Prague in 1612, his place at the abbey is taken over by Kašpar Questenberg, who continues his work. The reconstruction of the lower cloisters and the prelature is completed. The Hospital of St Elizabeth is set up in Pohooelec, a monastery brewery is built, the College of St Norbert is established in the New Prague Town as a place of study for the members of the order, and the church is reconstructed and extended westwards. One of Questenberg's greatest feats was to oversee the translation of the relics of the founder of the Premonstratensians, St Norbert, from Magdeburg to Strahov, where they still rest.

Towards the end of the Thirty Years' War, the abbey is again sacked and plundered, this time by a Finnish regiment of the Swedish army. They stole many precious objects from the church and manuscript as well as printed books from the library. Work starts on restoring the monastery after the war, and Abbot Franck rebuilds the damaged prelature and erects a new Hospital of St Elizabeth. Under Abbot Jeroným Hirnhaim, the library hall (today's Theological Hall) is completed in 1679. In the 18th century, work continues on rebuilding the monastery in the Baroque style: a new summer refectory is opened, the brewery is rebuilt, and the farmland around the monastery is reworked. War hit the history of the monastery again in 1742 - the whole complex was hardly damaged by bombardment when the French laid siege to Prague. After this episode, the original medieval structures are rebuilt in the Baroque spirit.

The last great piece of building work in the abbey complex is the construction of a new library hall (today's Philosophical Hall) under Abbot Václav Mayer. The monasterial buildings then essentially remained as they were until the 1950s, when the official activity of monasteries was halted by the Communist regime and in-depth archaeological research of the whole complex started. During this time, at least part of the Romanesque structure of the monastery was renewed in a very careful way.

After 1989, when the abbey was returned to the Premonstratensians, costly reconstruction of the entire complex began and is still going on to this day.